The socialists in the NDP-Liberal coalition have declared a climate war on ice rinks.

Bonita Zarrillo, the NDP MP for Port Moody—Coquitlam, yesterday sent out a tweet calling for an end to indoor ice skating in the name of climate. 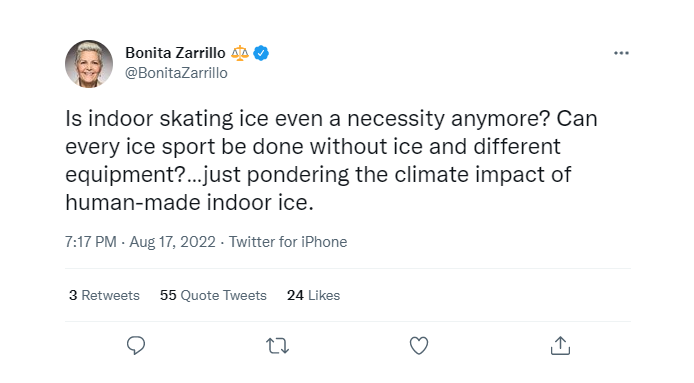 This tweet is just the latest example of how the issue of climate change is really used by socialists to push for culture change.

Indoor ice rinks are not a popular hangout for the jet-setting, champagne sipping socialist sort.

One tweet demonstrates just how out of touch Canada’s Left is with the lives of Canadians.

The local indoor ice rink is more than a place where people play “ice sport”.

It acts as a community hub.

It brings strangers together and turns them into neighbours.

It is a place where gold medal dreams are first forged in the hearts of children.

Only a socialist could look at a place which fosters fun, happiness and joy, then think the world needs less of that.

Please, help me send a message to Bonita.

Keep your hands off our ice.